Recently me & my wife were sitting idle at home so we planned to watch a movie. Bought the tickets online and went to watch the movie. In first 20 minutes we realized that the movie was boring and it was waste of time. I told my wife, let us move out and go for some shopping or anything else. At this point she had two options, option -1 to leave the movie and forget about Rs. 500 and time that we spent in the movie and enjoy something else which can increase our happiness level in remaining time and option-2 to continue watching a boring movie and waste the time. She selected Option-2 and immediately replied me that “we have already paid for tickets and how can we leave it now, we have to watch full movie”. Do you know why she did this? She felt that if we move out at this level we will lose Rs. 500. But actually Rs. 500 was a sunk cost. Whether we watch the movie or not had nothing to do with Rs. 500. But watching movie was going to waste further 2.5 hrs and also r 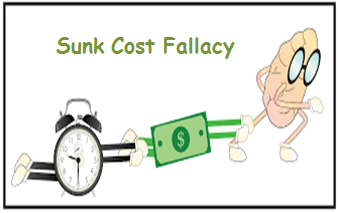 educe our happiness level. Whereas if we move out from that movie and do something else we may do something fruit full in those 2.5 hours which can increase our happiness level. This approach of sticking to our initial decision to recover time and money already spend is called sunk cost fallacy. You are running behind the cost which is already incurred and should not be considered for future decisions. Decision of watching movie was not a rational decision it was not taken considering future cost benefit analysis it was taken to justify money and time already invested in initial decision of watching movie.

A sunk cost is a cost that has already been incurred and thus cannot be recovered now, in an effort to recover it we end up spending more money, time and energy. This behaviors of committing more money, time or effort to our earlier decisions is called sunk cost Fallacy. Sun cost fallacy is not only about money spent, it is also about time and effort spent on something. Let us see few more examples of Sunk cost.

– Sunk Cost Fallacy in Corporate Decisions: Many times I have observed this in corporate world that company was conducting a marketing campaign or a product research and in the mid of that campaign or research they realize that this is not going to yield much benefit to the company but by that time they have invested a lot of time and money on the project. So ideally they should leave investing more time and money on that project but generally they will keep working on that with thought to recover the time and money already invested.

– Sunk Cost fallacy in Individual decisions: A study was conducted on few people; they were offered two picnics from two different agencies for two different places. One was costing them Rs. 3000 and another was costing them around Rs.2000. They subscribed both the picnics and paid the subscription money (subscription money was not refundable on cancellation) and then they were informed the dates of the picnics and purposefully dates were kept same. Now they had to select the one and on analysis it appeared that trip costing Rs. 2000 would be a better trip to enjoy. But most of the people selected to go for picnic for which they paid Rs. 3000. This happens because they believe that loss of Rs. 2000 is less than loss of Rs. 3000. Logically their decision should be based on the factor that which picnic will give them more happiness. But here the decision is taken based on loss incurred by not going in the picnic so the picnic which is more costly is preferred even though it will give less happiness.

– Sunk Cost Fallacy in Equity Investing: Sunk cost fallacy works very strongly in equity investment. When people buy shares of a company and suppose company starts doing bad and share price falls then either investor’s start buying more shares of that company with idea to recover earlier invested money or they don’t invest new funds but also don’t sell existing shares just with a mindset that already they have invested good amount of money and time in this company so will wait for the share price to reach to their purchase price. Here when company is really not doing good then there is no logic to buy more shares or to wait for share price to rise and reach their purchase price because money which is already invested is gone and whatever loss they are incurring now is a sunk cost. Logically if as an investor if you had not invested in this company earlier and you were analyzing it for the first time to invest then will you invest in it? The answer is NO. Then why you want to stick to this company just because of sunk cost fallacy. Ideally, if any other company is available with good future prospects then one should sell these share, book loses and move there. But more the share price will fall more the investors will stick to it. Both these decisions are not taken rationally but due to sunk cost fallacy. Also anchoring bias is working together here.

– Sunk Cost Fallacy in Life Insurance Policies: It is very common in India to purchase life insurance policies with investment or tax saving motive. Almost every month 4 to 5 clients come to us with a lot of life insurance policies which don’t suit their life insurance needs and have been sold to them as a investment instrument and when we analyse them, return on investment is sometimes hardly 6 or 6.5% p. a.. We prepare a sheet for every policy where we give calculation that if that policy is surrendered at this stage what will he or she get back and from here if that money along with future premiums is invested in another investment instrument it will give them 11 to 12% p.a. kind of returns and at the end of tenure there are very high chances that he or she will receive double the money that they were to receive from Life insurance policy. But to take this decision one has to book losses from current life insurance policy which most of the people are not able to do. The decision of surrendering existing policy and booking loss is psychologically a very difficult decision because of sunk cost fallacy. Even though most of clients agree with logic to surrender the policy, when it comes to surrender and book losses they cannot move ahead due to sunk cost fallacy.

Why we get stuck with Sunk Costs? & How to free your mind from Sunk Cost Fallacy?

In all above cases you will realize that sunk cost fallacy is most dangerous when we have invested lot of time, money, energy or love in something. This investment becomes a reason to carry on, even if we are dealing with a lost cause. The more we invest, the greater the sunk costs are and the greater the urge to continue becomes.  I found following few reasons for this human behavior.

To conclude with, rational decision making requires you to forget about how much time, money and effort you have put on an investment or project and consider only future costs and benefits from the same. So while taking such decisions we should not be anchored to cost, effort or time that we have already put in, we should see whether it is beneficial to continue this or no.